Installation no. 2 for high and low frequencies 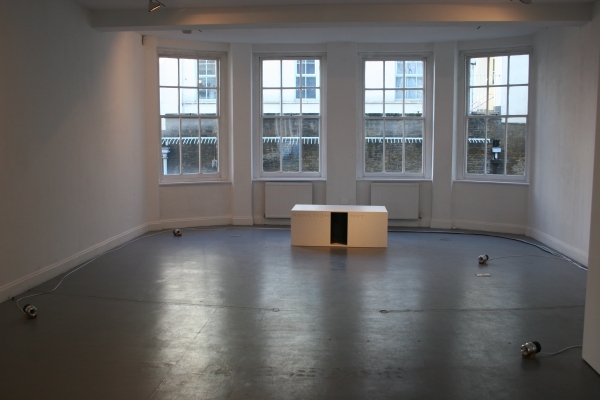 This is John Wynne’s first solo show in London since his acclaimed installation for 300 speakers, pianola and vacuum cleaner at Beaconsfield Gallery in 2009 (subsequently shown at the Saatchi Gallery). From what Charles Darwent in the Independent described as the ‘frail monumentalism’ of that work to the delicate intimacy of Hearing Loss, which uses only the self-induced feedback from 6 hearing aids left behind when his father died, Wynne’s work invariably draws our attention to the act of listening.

As Brandon LaBelle writes in the Journal of Visual Culture, Wynne’s installation practice ‘captures the inherent promiscuity of sound to cross over between inside and outside environments, ultimately creating a sense of immediacy and also intrusion. Wynne subtly underscores how sound and listening may create points of unexpected contact, sudden awareness, and charmed resonance, to undo the lines between what we imagine as public and private. His [work] delivers a considered noise that puts disparate elements into ambient conversation.’

The new site-specific installation for Angus-Hughes and Fieldgate grows in part from ideas John began working with while doing sound for a theatre production in Toronto: ‘I don’t normally work in theatre, but I was promised enough creative freedom to make it an interesting challenge. I decided that the best way to allow room for the actors’ voices but still make the sound a powerful presence was to occupy the frequencies well above and below those of the human voice. I was also interested in exploiting the phenomenon of ‘beating’, which occurs when tones of slightly different pitch are played at the same time and alternately reinforce and cancel each other out in rhythmic patterns that can be manipulated by changing the relative frequencies, allowing me to manipulate the atmospheric tension in a continuous but almost sub-conscious way.’

These ideas led to Installation no. 1 for high and low frequencies at the Rochelle School Gallery in 2011. This work also built on ideas about the relationships between interior and exterior sound explored in the installation for 300 speakers. Low tones were tuned to the resonant frequencies of the space and both low and high sounds were created in situ to reflect specific attributes (sometimes timbre, sometimes pitch or rhythm) of the existing sound environment – not by imitating or sampling, but by creating sounds that seem to either anticipate or temporally extend the indeterminate ambient soundscape. The effect is to make the walls of the space seem acoustically translucent, drawing the sounds from outside into the space and making them part of the piece to the extent that visitors often can’t tell if sounds are coming from within the gallery or from outside. Working with very low frequencies also offers the opportunity to discover what sounds the building itself can contribute when stirred by long wavelengths that are more felt than heard.

Reviewed by Daniela Cascella in Frieze Magazine on 01/05/12:

"On entering the large space taken up by John Wynne’s new installation, I’m overwhelmed by the sheer physical impact of low frequencies as they make the windows rattle and the floor tremble, and by the elusiveness of high frequencies that flutter around the ears and intermittently create an odd sense of aural déjà vu. Swarming filaments of sounds turn my hearing inside out; changing patterns of sharp tones nail me to the room until I don’t know how long I’ve been listening. As I move around, I begin to single out a barely there but lucid shuffling, a slightly familiar yet hard-to-categorize rhythm. Are these sounds seeping into the room from the outside, or are they generated by these very frequencies? Are they vaguely echoing something I’ve just heard, or am I aware of this intricate sonic tapestry for the first time?

Eight tweeters are scattered around the floor, while two subwoofers face each other from both ends of the longitudinal axis of the room. Over the course of a looped 20-minute cycle, they emanate high and low frequencies that act on the acoustic properties of the room, and let sound be perceived as a physical entity rather than a solely aural one – on the boundary between what is heard by the ears and what is perceived as vibration by the body. Technical explanations of the acoustic laws employed by Wynne would not be enough to encompass the effect of the perceptual phenomena at play: this installation is not about pure frequencies as such, but about the way they bounce off and through the walls, ceiling, floor, windows – inextricably tied to the fabric of this building – and encircle and engross whoever enters the room.

In his installations Wynne never displays any elements beyond what is necessary to propagate sounds. Nevertheless, the sparse arrangement of speakers does not imply this piece is just functional: it touches instead on something fundamental. This work appears as the physical projection of an otherwise concealed, yet primary force that underlies the activity of listening – not only spatially but also culturally and temporally. Sound waves propagate and bounce around this room according to the same laws that make them bounce and propagate anywhere else in the world, at any time. Sounds exist in this installation ‘as they are’. Or do they? Frequencies are perceived here as a hidden yet founding element of everyday life: like the change of light during the day, the flow of water, the shifts in the weather. And yet this is not a demonstration of acoustic laws: it puts each listener in a heightened relationship with the aural phenomena and inevitably – like all the forms of sound-making focused on the environment, on the passing and reverberations of time – it prompts deep considerations on how we relate to what moves us and in spite of us; to the shape of what we hear, to how this shape changes and melts with the everyday, how it anchors each listener to the here and now of their listening. Rooted in timeless physical laws, this work nonetheless gains resonance in the contingent, changing laws of individual perception.

As I listen to the uncanny high-pitched tones in the room, other high-pitched tones echo in my mind: those which radiate across an interview that Robert Ashley did with Alvin Lucier, for his seminal TV series Music with Roots in the Aether (1976). At some point Lucier says that instead of supplying feelings, he makes pieces about natural acoustical phenomena, embracing feelings that are already there. Likewise, Wynne does not consider eliciting any specific emotional responses from the listener and prefers to leave his works open, not prescriptive. And yet, rather than only employing tones acting on the resonant frequencies of the room, Wynne also mixed in newly-synthesised frequencies reflecting specific sounds from the outside, that he heard while preparing the piece. ‘The effect is to make the walls of the space seem acoustically translucent’, he says. The critical shift in this installation is from apparent mimesis to a subtly unfolded artifice: permeable and open, prompting hesitation, the space created by Wynne does not display the purity of acoustic phenomena but points to the singular, changing engagement with sound that occurs at different times for different listeners. And so does Installation no. 2 for High and Low Frequencies appear: a complex block of raw vibrational forces, slowly eroded by a sfumato of elusive reverberations, on the frayed edge between abstraction and contingency, between knowledge and experience".