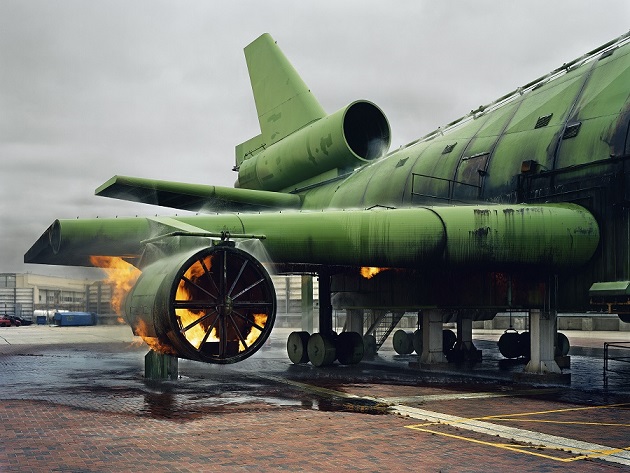 Staging Disorder was an exhibition of photography, sound and moving image exploring the contemporary representation of the real in relation to modern conflict at London College of Communication (LCC)

The photographic works posed questions about the nature of truth as it manifests itself in current photographic practice - while the sound works extended these themes adding a multi-dimensional resonance with sound and moving image installations and written texts.

Beneath the town of Sunabe, on the island of Okinawa, there is a cave, its walls are rough in places and smooth in others and water drips. It was here that the former community leader, Yogi-San sheltered from the US naval bombardments ‘typhoon of steel’ and it was here where he took us to tell his story. In the gallery, that story is relayed in projected subtitles and by a composition of environmental sounds that connect the cave and Yogi’s memories of its past to the present day and the audible American military presence of the USAF base of Kadena, located some 100 meters from the cave.

“We are concerned here not so much with the almost natural phenomenon of identifying an enemy who is threatening us, but with the process of creating and demonizing the enemy.” Umberto Eco

Sound and language are powerful tools in the construction of imagined conflict scenarios and their aftermaths. Preparations for an Imaginary Conflict draws on the rhetoric of was and how it has been used to prepare the public for a possible attack or to build up the idea of the hostile ‘other’ in a number of real and factional situations. The works includes recordings from public information media, oral history, archival news, texts and specific geographic sites.

This work explores sites of major environmental damage and asks, ‘What can we learn of dangerous places by listening to their sounds?’ On two trips to Chernobyl in May 2006 and July 2007, many field recordings were made in and around the ‘exclusion zone’ in Ukraine. These include sounds of wildlife radiometer bleeps, the eerie ghost town of Pripyat and songs and poems of the traditional people in the area, whose stories are the least known of the disaster. The exhibition presents a selection of the recordings with photographs from the same location.

For Staging Disorder, David narrates an autobiographical account of growing up in the shadow of the Royal Gunpowder Mills.

The exhibition was initiated and supported by Karin Askham, Dean of the School of Media.