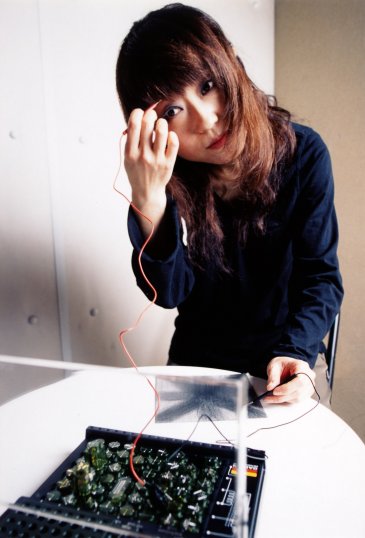 Two people sit across a table from each other. They converse informally but also improvise with sound in their own way, never quite settling on either one mode or the other, sometimes moving out of synch with their opposite partner, sometimes performing and speaking simultaneously. Are there rules? Probably, but does anybody know what they are?

Table Manners is a performance strategy somewhere between a séance, a chess match, table tennis, a dinner date and an interrogation. Devised by David Toop, the format blurs and confuses boundaries between sound art installation, music performance, public lecture and private conversation.

Haco is a composer, vocalist, electroacoustic performer, sound artist, and a founding member of After Dinner (1981-1991) and Hoahio. She has created numerous recordings both as a producer and engineer based in Kobe. In her live performances, she uses voice and self-programmed electronics as an organic method. With her "howling pot" performances, which make creative use of feedback, and "Stereo Bugscope," which captured oscillating sounds emitted by the circuitry of an electronic device, she had developed a new genre of art.
For more on Haco, see: www.hacohaco.net
SoundCloud (Excerpts of Haco’s music - downloadable)
www.soundcloud.com/hacohacodotnet/sets/haco-sound-1

David Toop is a composer/musician, author and curator based in London. Since 1970 he has worked in many fields of sound art, listening practice and music, including improvisation, sound installations and video works, field recordings, pop music production, music for television, theatre and dance. He has recorded Yanomami shamanism in Amazonas, appeared on Top of the Pops with the Flying Lizards, exhibited sound installations in Tokyo, Beijing and London’s National Gallery. He is also the UAL Chair of Audio Culture and Improvisation and member of CRiSAP.
Read more about David Toop and the University Chairs project.