By Salomé Voegelin and Anna Barney

This presentation happens in the context of Listening across Disciplines, a research project lead by Prof. Anna Barney and Dr. Salomé Voegelin, which brings together researchers from the humanities, the arts, science and technology to debate the potential of listening as a shared methodology for investigation, analysis and communication. Through a focus on sound the project is engaged in new forms of knowledge production, its interpretation and ultimately its dissemination. Developing on from this background this presentation focusses on the potential listening has for the imagination of the future of education in a globalised world post-truth.

When Jean-Luc Nancy asks about the secret that is at stake when we truly listen, when we focus on the sonority rather than the message of a sound, he points to the “soft” between of things, where we do not hear the source as a quasi visual and complete appearance, but hear the process of its unfolding and our part in it. Sound provides incomplete material and brings signifiers into doubt: it is not ‘this’ or ‘that’, as things defined against each other, a matter of differences and similarities; and it does not offer us a certain truth, but is the moment of production of what the thing and the listener are, which demands participation and offers an investment in its truth. Thus listening does not find its legitimacy in a source, but performs the interrogation of what that might be. Consequently an education according to listening promotes an attitude of doubt in the complete, in what we think we see as a persuasive whole, and invites the probing suspension of pre-conceptions and naturalized views to allow for the discernment of what is false and what might be true. In this way the adoption of listening as a method and strategy in education promotes interrogation and a practical engagement in the truth of things that avoids the simple acceptance of fake news, untruths and post-truth narratives, and instead hears in the soft between of things the “how” of their popular appeal and acceptance.

4th Council of Europe Platform Exchange on Culture and Digitisation

The conference focuses on the potential of art and science as an effective means of strengthening democracy in Europe.

'The Council of Europe's series of conferences dealing with the impact of digitization on culture will be continued this year in Karlsruhe as a cooperation event with the ZKM. In the years 2014–2016 the CoE’s »platform exchange« took place in Baku, Linz and Tallinn.

The aim of this year's conference in Karlsruhe will be to focus on the potential of art and science, which has so far been under-utilized, as an effective means of strengthening democracy. The tools of digital culture will be discussed. Actors and decision-makers from different disciplines, institutions and citizens' initiatives will work on two main topics in the 1-day conference. First of all, the use of appropriate digital tools will be explored to enable citizens to actively participate in strong European democracies – i. e. to promote digital literacy and to train resistance forces against current phenomena threatening democracy, such as populism, fake news and xenophobia. Next, the focus is on networks in culture, the arts and the sciences, which are also actively working against these anti-democratic tendencies.

Digitization undoubtedly expands public space and creates new opportunities for participation, but also raises questions about intended and unwanted effects and their control. While populism strives to reduce the diversity of voices and thus dissolves democracy, it is the principle of the arts and sciences to cultivate diversity, complexity and productive competition. The ethos of democracy is based not least on this. In this sense, digitization has an innovative function because it provides access to the heterogeneous messages produced by cultural and artistic means.'  - read more on the ZKM website. 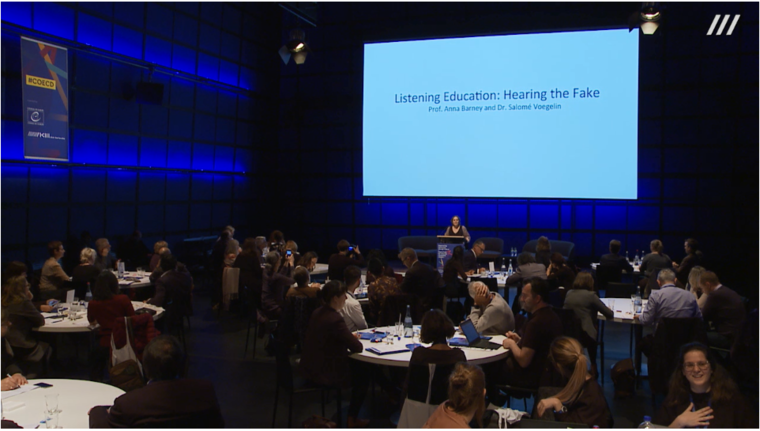