This SGFA zine celebrates a growing network of people working within, through and beyond the fields of sound, feminism and gender who have contributed to the SGFA events of 2012 and 2014. Sound::Gender::Feminism::Activism was initially established as a research event focusing on the role of gender in sound-based arts and experimental musics, following on from the Her Noise: Feminisms and the Sonic symposium at London’s Tate Modern in May 2012. The aim was, and still is, to develop and expand upon dialogues and discourses related to feminism and sound as well as to form an international network of researchers, artists and practitioners working in these areas.

Sound::Gender::Feminism::Activism began… as a an antiphonal call seeking a response; is there anybody out there, where are you, who are you, how are you, is there a ‘we’? Through the DIY tenderness sometimes speaking softly, finding support for needed amplification, curious about who might be listening, who might be sounding, do we sound the same? Can we do this differently? To what?

Do we have a microphone? A stand? Why aren’t the amps working? Did you turn the power on? Can you hear me??? Ohh, yes, yes, nettle salad, that’s how we met, up in the sky, tentative greetings in corridors, paper plates, in a lift. Gossip, laughter, anger, frustration, at last together, mirth, kisses, psychedelic unicorns, macho intellectuals and glitter balls. Yes. And No.

Of strings and strings, that bind, that are bound to come undone, that are “useful ways of thinking”… “vulvas, bears and lions”. But what draws us together, any more than string? That sound, beating from anger and neglect, a rebellious drumming, a coded communication spat through stubborn teeth in spaces of our own making. Domestic, private, personal, intimate … and loud, loud with friendships emerging through sound. Musical relationships passed on and on, inspired further, held together, tentatively, sing, string snaps. Of feminist utopias and sounding bubbles, sinking, shaped, blown and held afloat again through sheer will in a world of pins and pricks…tom tom tom…

The first event in 2012 brought together thirty-six academics, artists, musicians, engineers and music journalists from the UK, Europe, United States and Australia to share their working interests and concerns.

SGFA2014 focused the ongoing development of the field of feminist sound studies around the question What, in the historical present, might constitute an activist life in sound? It was specifically seeking to query the place and performance of activism within discourses and practices of sound arts, sound-based arts and experimental musics engaged with gender, feminist and queer scholarship through intersectional concerns to examine radical sonic practices within the contexts of feminist and gender politics. SGFA2014 incorporated presentations, performances and screenings from over thirty academics, musicians, film-makers, radiophonic artists and performers from around the globe.

Since our initial activities in 2012, discussion and criticism of feminism has re-established its rightful place in the discourses of academia and culture but in general feminisms and their associated concerns have traditionally made little impact within the field of sound art and experimental music.

This zine is a celebration of the prolific variety of research and artistic practice which is engaged with aspects of feminist thought, theory and everyday life. 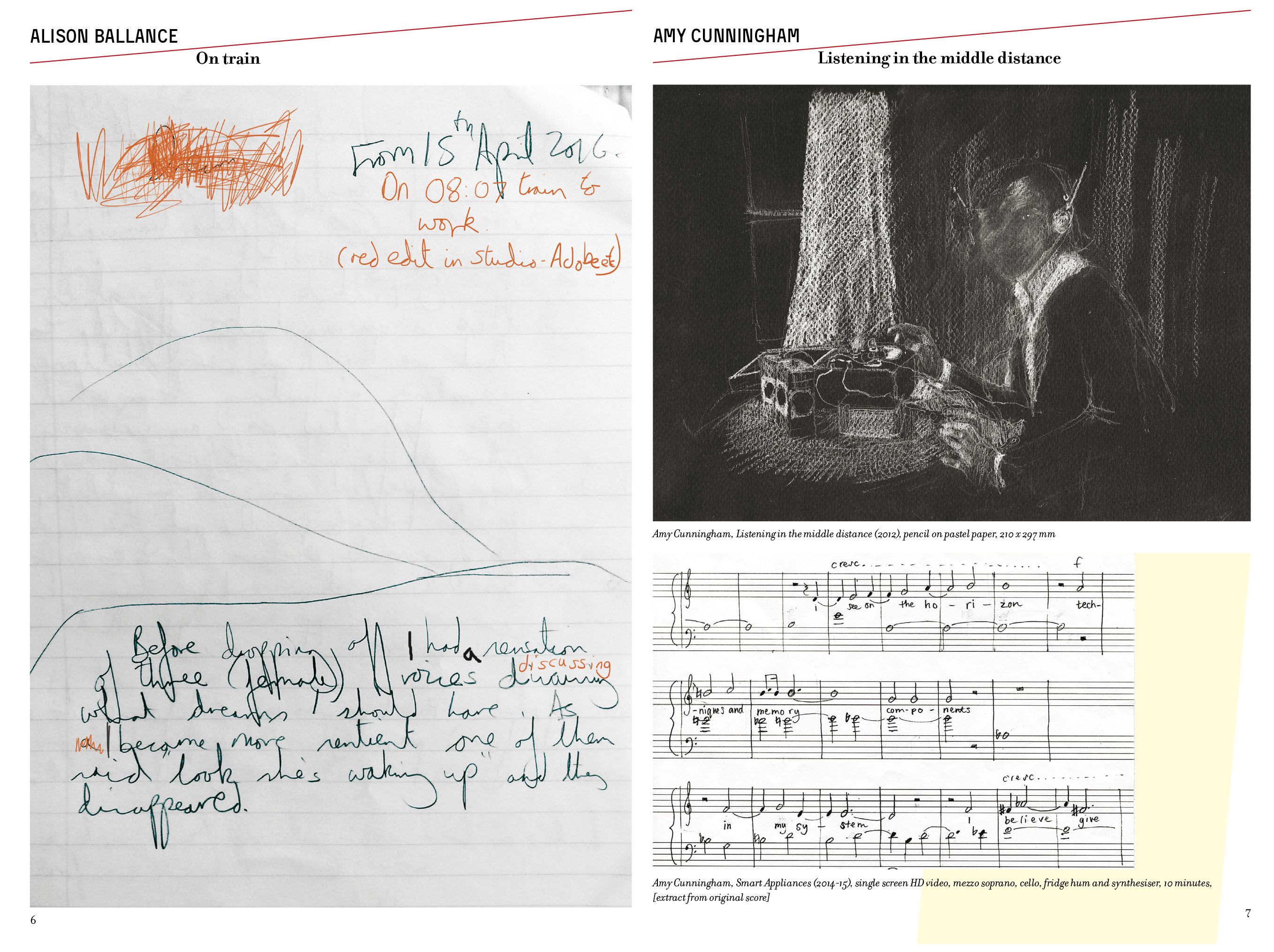 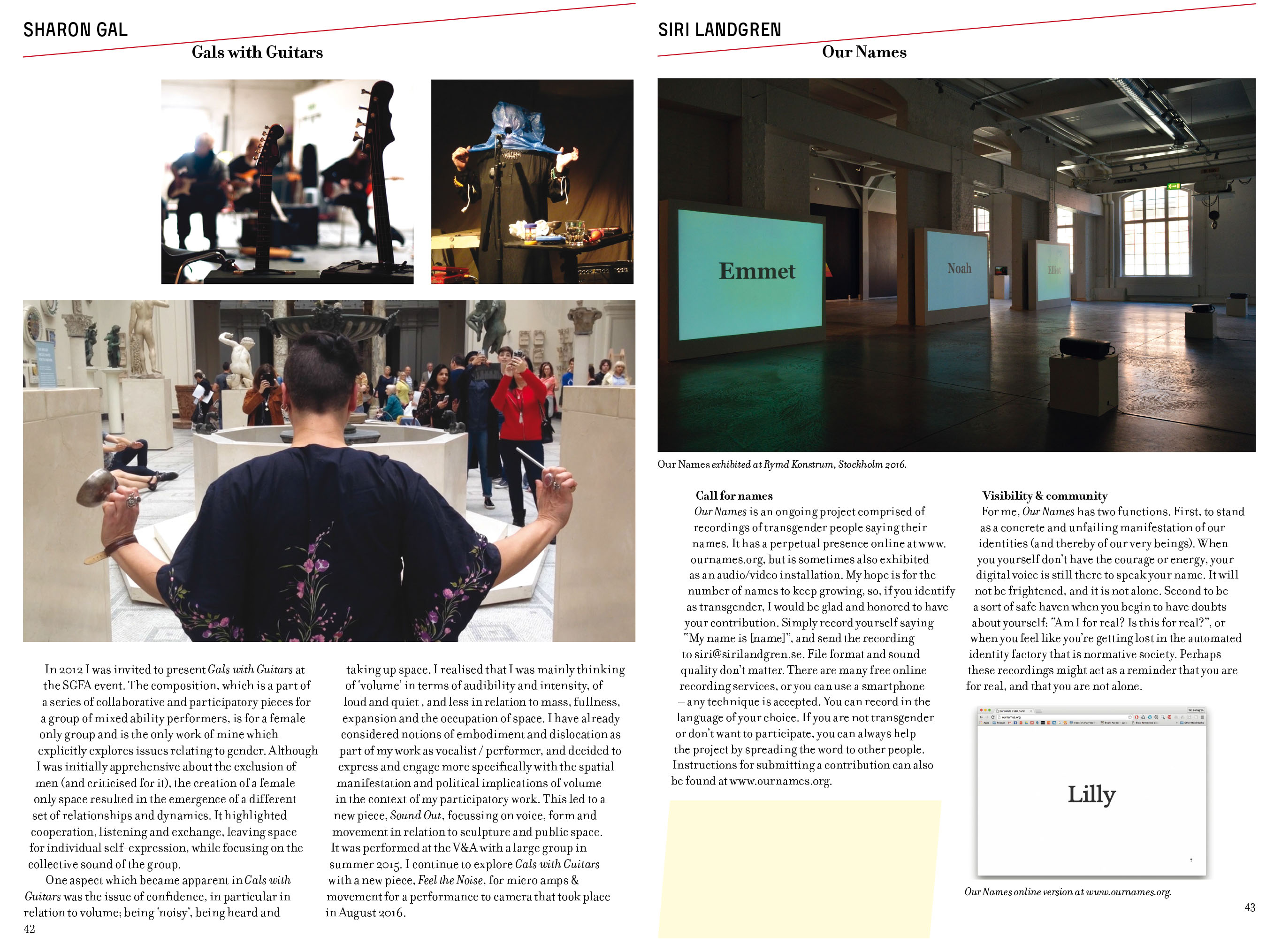